From RunaWFE
Jump to navigation Jump to search

RunaWFE consists of the following components: 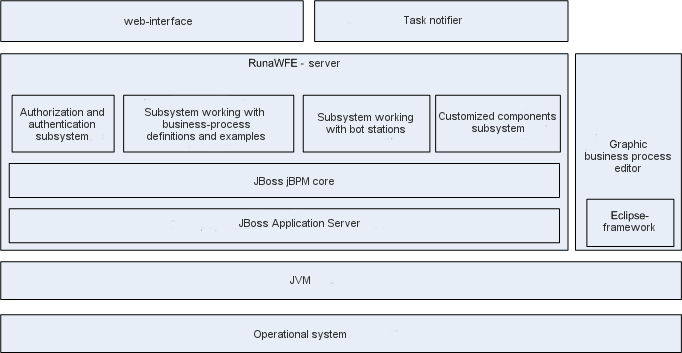 Description of the main components

In this section descriptions of the main system components will be given, starting with JVM level.

RunaWFE is written entirely through Java. That is why for RunaWFE to work a Java Virtual Machine - JVM should be installed in the operational system. The use of JVM allowed RunaWFE-server to be independent from specific OS. The developer studio uses Eclipse framework which has OS dependences, but still supports all widely used operational systems. The developer studio can work under Windows, Linux, FreeBSD, MacOS and others.

The main system component. RunaWFE-server implements process example runtime environment in correspondence with its definition. Allows to create and alter user properties. Generates task lists and visual forms corresponding to the tasks. Allows to set different permissions for the system objects. Can serve as an integration instrument for enterprise's automatized systems.

The following modules are included in RunaWFE-server

Designed for creating a process model, where execution sequence of elements of work and data are defined, swimlanes are assigned to process participants, routing rules are set, graphic forms of tasks which are used by process participants to execute tasks, are defined. The developer studio allows to design a model in the form of a graphic diagram setting a flow of work elements with the description of the model details as properties of separate actions, subprocesses or process in general. Developer studio is an instrument for a process developer, business analyst. He or she provides introduction of alterations in a bisiness process by a simple modification of its graphic diagram and elements' properties.

Represents an environment for user's access to RunaWFE-server functionality. In particular: displays task lists and task visual forms. Allows users to execute tasks. Allows the system administrator to set permissions for system objects. Allows to monitor execution of business process examples. It is a thin-client application.

Like the Web-interface represents an environment for user's access to RunaWFE-server functionality. Additionally implements user notification of new tasks. Contains a component - rich-client application, which is installed to every user.

Users and system components work together

RunaWFE-server is launched on one server. Bot stations can be launched on several servers.

On users' client computers task notifier is launched or browser, where system web-interface is opened.

Bot stations contain bots, which repeatedly inquire the RunaWFE-server. If the business process examples executed on the server have tasks for bots loaded in the bot station, the bots execute these tasks and return the results of their work to the RunaWFE-server.